After hearing other people talk about their amazing experiences with the supernatural and paranormal, Chris decided to use his graphic design experience to document these stories in a publication called Unknown Magazine: Real Experiences of Unusual Phenomena. The magazine ran from spring of 1997 to early 2001. As publisher, art director and editor, Chris met countless people from all walks of life (often tracking down fascinating people whose stories he had heard second-hand). These contacts shared very personally about their incredible experiences. In the process, these witnesses to the unknown revealed little-known details and insights about the unseen world around us. From ESP, ghosts and demons, to alien agendas and secret government projects, Unknown Magazine covered it all. While the magazine only lasted four years, it was a life-changing experience for Chris. Here’s what he says about…

…strange things that happened during interviews:

“I will never forget what happened one night when I was on the phone with an alien hunter. He was in the middle of explaining that aliens and even the secret government were capable of spying on us without our knowledge, when I began to wonder if his story was more SciFi than legitimate. All of a sudden, the door to my room slammed shut so hard and so loud that my contact heard it on the other end of the phone. The crazy thing was not just the timing, but also the fact that there was no reason for it to happen. No one lived with me, and there were no windows opened. It made no sense. Needless to say, I was startled. Months later, even crazier things began to happen, to the point that I was not only feeling paranoid, but also becoming quickly convinced that our government and others are far more involved in our lives than we can possibly fathom.”

…why he stopped publishing a magazine he loved: “I loved every aspect of working on this magazine, from laying out stories and designing covers, to meeting and speaking with people all over the world. Tracking people down to get their stories, however, was sometimes complicated and financially it was killing me. I had a full time job in the mortgage business that was 100% commission, and I was spending 180+ hours just designing the magazine with no time to sell to advertisers. Being publisher, art director, editor, etc., well, it took a toll. I had a couple of fine people helping me edit and proof read, but it wasn’t enough. I was burned out, tired and almost broke from spending four years of my life everyday on a magazine that was barely bringing in enough to cover the printing. All I was seeing was RED. I had no social life (working seven days a week does that to you), plus the mortgage business was getting extremely busy. As passionate as I was about the magazine, something had to give.  So I made a difficult decision, I stopped publishing. I suddenly had time to concentrate on a relationship and put time into my full time job. “The kicker was that, after I made the decision to stop, the sales numbers started coming in from the last issue, and those numbers were great. My sales, which four years earlier had been at a 42% sell through, were now at 72%.  The magazine was finally breaking even! But it was too late. I was spent. “Publishing is a very tough industry. You don’t make money on sales. You make it on advertising, which was the single area I’d had no time to develop. If I were ever to do it again, I would find a company to back me. No way would I attempt the whole thing again on my own.”

…what he learned, and what he’s grateful for: “I am so grateful I went through the publishing experience. In attempting to be the voice for thousands of people I met from all walks of life, I learned a lot, and no one can take that away from me. I mean, who knew?

I never thought I would be talking to ex-CIA agents and alien abductees, as well as people who were experimented on, possessed, or saw demons, angels, Buddha and even Jesus Christ. I realized quickly I wasn’t the only person who’d had extraordinary experiences. People everywhere have a story to tell if you just take the time to listen. “I was also privileged to meet artists who drew and painted incredible artwork for the cover and interior of the magazine. No other publication devoted to the paranormal has matched what we accomplished. Most magazines out there look the same cover to cover. Sorry, that’s my art background speaking. Yes, I will always be proud of Unknown Magazine. The next challenge will be for me to put pen to paper and finally write my own story. So much of it is unknown.”

How to Get Back Issues: While the magazine is no longer published and mostly out of print, three back issues are currently available for purchase. 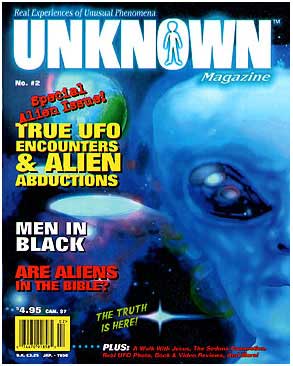 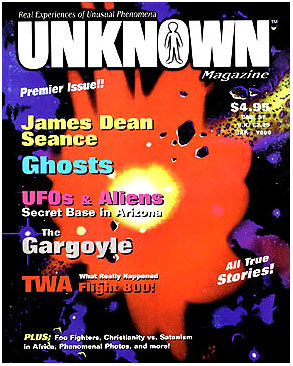 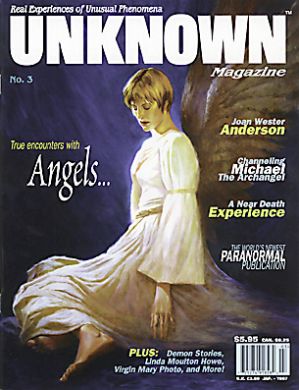 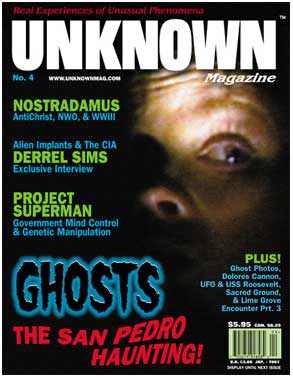 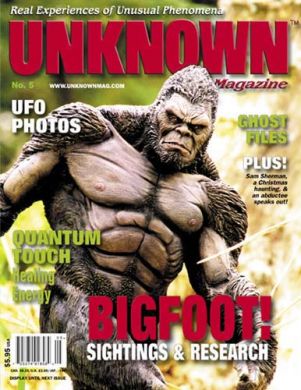