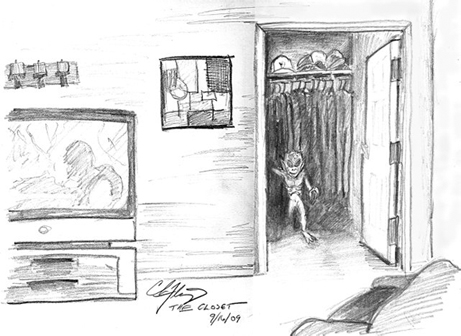 As a child growing up I was often fearful of the dark for what lurked around the corners of  the darkest rooms and the closed closets. It was on two certain occasions the closet door swung open and a black thick massive cloud, similar to a tornado rushed towards me. I have often talked about this experience in my lectures across the country and found many children and adults who have seen and had similar experiences. The question has always remained, who or what is in that black mass? Where does it come from and where does it go? My fear as a child was always, what happened if it grabbed me and pulled me into its own darkness? What would become of me? This fear was all to real, and no dream or nightmare could compare could compare to the reality of what I was witnessing. My sheer terror and screams running away from it was witnessed by a maid/babysitter we had while my parents where out of town working. She quit after this experience. While I believe I have seen what is in those clouds, and have assumed it is a vehicle or higher form for which they travel and move in and out of their dimension. I cannot be 100% sure. What I am sure is that in September of 2009 a creature, that I had not seen since I was 5-9 years old manifested for the first time since and made me realize that in 35 years not only has my size changed but my fears. What I saw last year was not a corner of the eye sighting,  it was a full on reminder. That they are still around, watching, waiting. At first I was in shock, but then it quickly turned to anger as I was reminded of the fear I felt as a child and now as an adult, one not afraid to confront that which I have been facing for the past 20 years had just invaded not only my home, but my consciousness…no longer as a child…as an adult who will no longer run. I looked away and then looked up again. It was still there, slowly moving back into the darkness of the closet and slowly becoming transparent as if it was going back into its own dimension. I would not say it was becoming invisible, it was still there to a degree but moving away from the illumination from the room and bacakwards into the darkness was taking it somewhere else as well as passing out of my visual spectrum. A certain frequency of light and just the right OPEN consciousness allowed it to be seen. I turned away at first in shock and catapulted into past memories, and then I turned and looked again and watched it creep back into the shadows of the corner of the closet. As I watched in awe, its eyes gleamed back into the light, and then it retreated back into the darkness of the shadows. I jumped up and ran to the door…angry. Facing what was now an empty closet. I cursed inside my head and then spoke words out loud. “How dare YOU!” I yelled how I was no longer afraid and to show itself once more. Nothing occurred. I knew it was gone, as if it was toying with me. What was the purpose..what was the message? I pondered on this for days and weeks. I have a good idea, not one I am about to share.

Two weeks ago something happened again, flying me back to the events that occurred in my home on Park Lane from 1972-1978. The hauntings and the evil that resided in that house. I felt it again, but this time in my current home. It woke me to sheer pain in my left eye as it was ripped open again from a corneal tear and abrassion. I cursed and screamed around the room, not only in pain but the fact that the one thing I feared and was terrorized most from my childhood home had somehow and someway found me. It always was, the short creatures and the black cloud showing itself first, and then the larger darker more powerful being coming next. I once again raced around the house cursing and telling it to leave. How dare it come into my home. To show itself, if it dare. I yelled that it was weak to attack me in my sleep, when I was defenseless. NOW that I was wide awake, where was it?

I don’t have all the answers to what occurred in Sept and a few weeks ago, but what I do know is the feeling, what I saw I have not felt in over 35 years. For the first time since I felt and saw what plagued me for years growing up as a child and I honestly believed it was over with. Now I am certain it is not.

There was a part of me relieved to know that what happened to me as a child did in fact happen, but now as an adult seeing it again quickly makes me realize that most people would never believe it, unless they saw it for themselves. How does one talk about something like this? What happens next?

3 thoughts on “Out of the darkness”