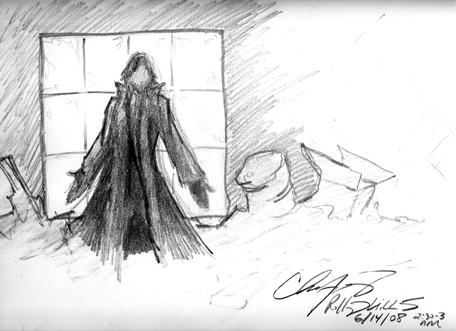 Drawing of The Shadow person 4 seconds before it swirled away like a vaporous bat. This took place at Rolling Hills 6/14/08 about 2:30-3am to the left of one of the rooms off the hallway in the basement-long corridor. With me was Patrick Burns and 4 late night auction winning fans. I will never forget this….as we were staring down the hall watching for shadow people, I suddenly turned to the left as my gaze was drawn away from the darkness and into the room along side me…The moonlight was shining through the large window and there was a solid male figure standing in front of the illuminated sill staring right at us. For what seemed like three seconds I stared at this dark foreboding person, and before I could yell for the others besides me to turn, what seemed like a he imploded into a small black mist of shadow 1/8 the size of it’s previous manifestation and took off leftwards through the room and out the other door. In all my years I had never seen a shadow person dematerialize so quickly, yet take a form like that in less then two seconds. I felt he was saying in an intimidating way…”Now you see me, now you don’t.” I don’t believe in Vampires, but the way it stood, the overcoat it was wearing, and the pose it took as well as the form it quickly shifted to, proved to me that ghost or spirits with their conscious minds, can change their appearance as quickly as a thought or action that we make in our own physical realm. I have realized they are capable of outsmarting us and moving about so quickly, with such ease and control, it is extremely rare to get even get a glimpse of them. The fact it blocked out the window completely and had gone from solid to a shadowy mist in seconds left me staring at the empty window wondering, did I catch it before it left or did it want me to see its sense of control it has in our realm? I may never know.