Home/Blog/Shapeshifter Experience – 5/6/12 around 5am Central time 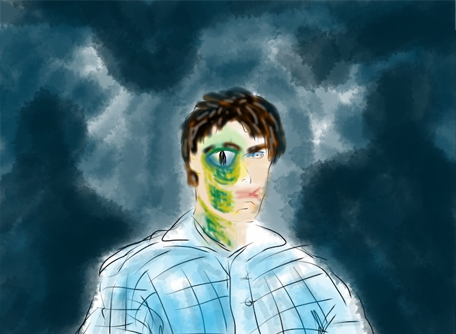 It has been two years since I had encountered a shapeshifter. This time it was much larger then the original creature I encountered almost two years ago.

You may be asking, what is a shapeshifter? – according to Wikipedia “In its broadest sense, shapeshifting occurs when a being (usually human) either (1) has the ability to change its shape into that of another person, creature, or other entity or (2) finds its shape involuntarily changed by someone else.”

They are part right on the description. In my case it was nothing human, except what it wanted me to see it as.

Last night while in the dream state, I saw a familiar face coming forward. His name was Johnny. Johnny was one of  my grandmas best friends and he became  my sisters and I’s step grandpa or in the simplest sense “the best darn adopted uncle any kid could have.” He was remarkable in the sense he lived across the street and when my grandpa died (I was really young when this happened, maybe 5-7 years old) Johnny would visit my grandma to make sure she was okay and from there they became best friends.

When I visited my grandma every summer growing up as a kid, I would spend one to two weeks there, sometimes beg my parents for my sister and I to stay longer, we got our wish some trips and stayed for a month. Johnny would always come over, we would play card games such as “fish” and “war” as well as board games like “checkers.” When he was bold enough we would head out to the street and play catch with baseball and gloves. He was always in good spirits and on a variety of occasions he would be drinking a lot of spirits. Getting drunk a few times here and there, however because Johnny was good hearted, drinking or being drunk never changed him. He was still pure good ole Johnny. Never angry, never mean, never out of place, except he had such a crazy sense of humour we would do funny and childish things and drive my grandma nuts were she sometimes kicked him out of the house and told him to leave. He was a good instigator and we loved that part of him. It was all in good fun and since Johnny never married or had kids, we were in many ways his adopted grandkids or children for that matter.

When my sister and I went to Canada to visit my Grandma every year, we were also going to visit Johnny as well. We  became that close.

When my grandma got sick we lost touch with Johnny she had to move into an apartment and Johnny did the same when his sister died. He had to sell the house since he couldnt take care of it alone. I will never forget the last time i flew to canada, my freshman year in College, to visit my grandma as she was in the hospital having her third triple bypass surgery. My father felt she might not make this one, so It was important for me to be there. While in town I called up Johnny and spoke with him. He was in terrible pain himself and not able to walk much and asked if I would be coming by to see him. He was very lonely and had no one but my grandma left in the world that he knew or interacted with. I told him I would, however my father never liked him, why I’ll never know. I think it was because he had on occasion made some passes at my grandma over the years and she always turned him away. My father probably got wind of that and didnt appreciate it.

The few days I was in Canada my father and I visited relatives and spent time at the hospital with my grandma before her big surgery. My grandma stated she didnt want to be here any more and as fate would have it the next day, after surgery she never came out of it. She was brain dead for hours and passed later that day, besides having a remarkable experience of her making contact briefly with me, I couldn’t stop thinking of Johnny.

My dad wouldn’t take me and we got in a huge argument about it. I wished to this day that I would have gone as I never got to see him. I spoke with him on the phone a few days later after my grandma passed and he cried, and didnt know what he was going to do now that grandma was gone. He also stated how bad he wanted to see me. He shared how he didnt think he would be around much longer as well. I never knew what happened to Johnny. I called a long time later and a recording stated the number was disconnected. I always felt bad  my father wouldnt take the time for me to go see him. I guess I should have gone anyway, somehow figured a way myself.

Back to the dream – IN the dream Johnny appeared and walked towards me to give me a hug, excited to see him I gave him a hug and told him how much I missed him. His hug and grip seemed to get tighter to where it felt peculiar, unnatural, and I therefore began to pull away wondering what was going on. As I struggled to pull away his face changed and it was if skin slid off digitally and bits of scales and reptilian skin began to appear through. This yellowish green tinted color, scaley and slimey, there also began to be a smell. Disgusting smell. As I started to yell and scream using my forearms and elbows to squeeze through its grip I quickly realized this wasn’t Johnny, instead it was a demon or reptilian pretending to be him and using his image to get close to me.  It had shape shifted into him and was trying to trick me. Sensing what was wrong, I pushed harder away from it and it began to change more….the one side of his face changed into a reptilian face. The eyes blinked and turned reptilian and the nose was gone and in its place a demonic reptilian nose with scales. I knew what was going on from a dream two years ago and yelled out “Jesus” and got mad at it, showing no fear, but aggressively saying “NO!” I woke up quickly with my arms in front of me pressed against my chest. I felt pressure released as if something was laying on me holding them down, I shot halfway up from the bed and there was a stench,  it smelled like cat poop but worse. It was all around me, I began sniffing the sheets,  my comforter, my arms and my breath, nothing. I looked around to see if the cats perhaps left a surprise on my bed…nothing. The smell began to fade and l Laid back down, puzzled…but only briefly.

A skeptic would call it sleep paralysis, bullshit, I knew it was more than that. Way too real and the smell, there was this lingering, defecating smell.

I began to replay what just occurred in my head. Was it just a dream or was it something more? An attack perhaps. I know from experience that evil can take another form and present it self in a way where you can become vulnerable, even welcoming  to whatever stands before you not realizing that it is not what it seems. Why do they do it? To scare, to intimidate? Maybe, or perhaps they are trying to get closer to get in, wether into your mind or soul. To control and take over. Wether spiritually, physically or fearfully.

Regardless of their intentions I am not afraid, never was. More disgusted that they would do that. More aware of one of the many forms they can take. But the question remains was it a demon in the biblical sense, or was it a draconian, a reptilian, an ancient alien race? Are they one and the same or  are there many different species or variations of them?

It is interesting how over the past 6 months I have been investigating this ideal, that there are many different types of races of aliens and inter dimensional beings. Even variations in their species. Was this attack to mock me or scare me? I don’t know and I don’t care.

All I care is wherever Johnny is on the other side, I want him to know that I love him and one day, when my time comes I will get to see him again and we will sit down to a game of checkers and  stories of what we have both been up to since we spoke last.

As to what occurred last night, it surely wasn’t the first. Events like this have occurred in varying degrees and situations to me for over 40 years and I damn well know this won’t be the last. There will be another day another time something else for them to try. Its not something anyone can prepare for, it is always unexpected, except I do remember last night my right ear kept ringing loudly at a bar. So loud I told the girl I met for a drink about it. Hmmm. Nope, not going to go there.

That’s a whole other field of experiences I don’t want to get into or even assume this time around.