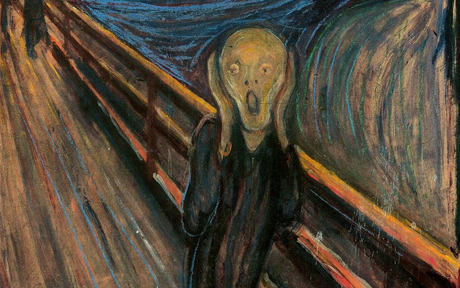 As you may or may not know I live in a haunted house, a house that, well, it is new, so the old saying “If it is an old house it must be haunted” does not apply here. People have often asked me, “Is it because you are sensitive?” “Do they follow you?” The answer is, I really don’t know for sure. Some encounters in my house have been from ghosts following me from my previous home, back in Jan 2009, and some have somehow, someway followed me home from certain haunted locations I visit -Stanley Hotel back in 2008 was one case of a energy draining type of spirit.

Regardless, I am well aware of at least 4 ghosts that reside in my house and a, well I am not sure what to call it, lets just say “An evil Spirit”. A black mass that is occasionally seen, not only be me and my cats, but visitors and friends that come over. This is the same entity that threw a glass vitamin jar at me months ago from a cabinet. A bottle of echinacea anyone?

Early this morning, while I tossed and turned realizing  I only had a couple hours left to sleep, the sun was already up and gleefully forcing its way through my blinds and curtains, the clock was patiently displaying 7:15am and someone in the house decided now was a good time to breath a loud moaning sigh. ‘MOaaaaauuuhhhhhhhhhh!” I looked up, glanced at the clock, stared at my cat on the floor and realized, well that’s the first. IT came from the hallway what seemed like the loft area. Same location were years ago the doors used to open by themselves frequently. This is the first time I have heard a Male spirit in my house speak out. Except for the shriek back in 2010, yeah that was a wonderful and freaking insane experience two years ago. Luckily I have the first one (Which was caught on EVP) on record and in my files. The DVP I heard is identical to that.

This phenomena, called “Direct Voice Phenomena” is similar to EVP except you hear it live, without a recorder and without playback. You hear it with your own ears as it happens. A disembodied voice, loud enough to wonder, and for some throw into a huge panic and anxiety attack “Who the hell is in my house?” In my case, I was thinking more of a,  for only  a brief moment mind you, “”Hmmm, must be the male ghost. I wonder why he let out a sigh? Oh, well back to sleep”.

It seems DVPS are becoming more frequent. It was only 4-5 days ago I heard the little girl, yes there is a little girl ghost in my house, (I have no idea why) we have captured (I and other investigators) her voice numerous times, speak out again. This time when I heard her voice, both cats who were sitting on my desk in the office with me, heard it also and sat up looking into the hallway of my kitchen and foyer. So if they heard it, I heard it, well you can figure that one out. No more then a minute later you hear a loud thump upstairs  (No one is in my home except me and two fuzzy critters sitting next to me- blood pumping yet?) and then we hear what sounds like a dragging sound and it stops, then a dragging sound again and it stops. Now if I was in a horror movie I would begin to think that a body was just thrown on the floor and dragged across the carpet and then dragged again, that or some large male spirit has huge feet and a horrible dragging problem. Did it freak me out you ask? No, not really. I hear and see things all the time in my life, having them in my house is no different then staying at a haunted location or haunted hotel. I pretty much am familiar with the ghosts in the house. Two males, one female and one little girl.

What the hell they do sometimes and why they yell out in  my house and for what reason, I don’t know but as I have written about in the past, the doorbell thing happened again today as well. After the Male voice. At 8:45am I heard a doorbell sound, similar to the house I grew up in, and this time I responded with “Okay I got the point” I got out of bed went downstairs and placed all the boxes from ghost outlet that were shipping that day out on the porch. It seems they were telling me, “Get up and start your day, post man is coming and you need to get those boxes out there you lazy bum”. He sometimes comes between 9-9:30am. You see if I dont make it to the door in time, he races off and jumps in his truck and drives off. They were just trying to save me the frustration of missing pick up and then having me have to go directly to the post office,  therefore putting my entire schedule off kilter.

Working and staying up til 3-4 am is not fun, and the reason for sleeping in trying to get the 7-8 hours necessary for a healthy lifestyle is. I have to wonder who runs the house the ghosts or I?

It’s nice to know that the ghosts can speak, even though what they say can’t in most cases be understood. To some it may be a nuisance but to me, well you might say it is beginning to feel like home.

I am keeping the Handheld vac handy incase the black mass shows up again. It is time to clean house.